HALF A YELLOW SUN: Gateway to Nigeria

Half of a Yellow Sun is a fantastic novel that I recently discovered. Written by Chimimanda Ngozi Adichie in 2006, it tells the sweeping story of civil war in Nigeria during the infamous conflict between the Nigerian government and military, and the Igbo people who seceded under the name, Republic of Biafra. Many of us remember the horror stories about starvation and disease that killed millions in the late 1960s. An after-effect of European colonialism, the war itself lasted two and a half years, from 1967 to January of 1970. After the execution of thousands and the “natural” deaths of millions of men, women, and children, the head of the Biafran army surrendered. Violence against the Igbo continued as soldiers tried to locate and punish those who instigated the break. This novel gives us a look behind the scenes of this epic period and may help us understand a little about the Nigeria that has emerged today. 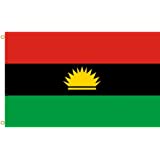 The title comes from the emblem on the flag of the Republic of Biafra, half of a yellow sun, proudly worn by all those loyal to the Igbo people and their cause. As the war takes its toll, the emblems on clothing, books, and currency become worn and frayed, symbolic of the spirit of the people. Adichie pulls us in so that our own hopes rise and fall with her characters as rumors abound about who has been killed and who has escaped the Nigerian army and the vandals that come in and destroy villages, robbing them of everything and killing whoever resists.

Shifting between the early sixties and the late sixties, the main characters are two couples and a servant. We are first introduced to thirteen-year-old Ugwu, who has just moved from the bush to the city to earn a living as a houseboy for “Master” Odenigbo, a writer and professor at the university in Nsukka, and his girfriend, Olanna. Often called “the Revolutionary,” Odenigbo not only trains him in the ways of service, but encourages him to get an education, even though he is the oldest student in the school. Ugwu’s love of books and letters carry him through the trials of war, where he is forced to become a soldier. Half the other couple is Olanna's sister. She and her white husband represent the upper class, the integrated society, the new Nigeria.

Ugwu’s secret love, however, is for the grace and beauty that Master’s girlfriend (who later becomes his wife) brings to their home. His loyalty to Olanna and the child she takes in is beyond compare. Ugwu does everything in his power to serve and protect them, and to make their lives during the war as normal as possible even without basics like food and electricity. And he makes a mean fish stew.

The themes in this novel go beyond war and famine, but extend themselves to love and loyalty for spouses, family, and country. Betrayal is the recurrent villain that rears its ugly head among couples, among families, and among tribes. Adichie grabs your soul with this novel, even if you knew nothing about Nigeria or the terrible war on which the book is based. In 2007, this book earned Adichie the Orange Award, annually given for the best full-length novel written by a woman in English. It was included in the New York Times 100 Most Notable Books of the Year. Mary Brennan of The Seattle Times called it “a sweeping story that provides both a harrowing history lesson and an engagingly human narrative.” Kate Kelloway of The Observer wrote, “Half of a Yellow Sun. . . an immense achievement. . .has a ramshackle freedom and exuberant ambition.” Finally, Assitou Sidime of The San Antonio Express wrote of Adichie, “This eloquent, prize-winning Nigerian writer is quickly proving herself to be fearless in the tradition of great African writers.”

A film adaptation of Half A Yellow Sun was presented at the Toronto Film Festival in 2013. The screenplay was written by Biyi Bandele and it starred Thandie Newton, Chiwetel Ejiofor, Anika Noni Rose, Joseph Mawle, and John Boyega. Faithful to the novel, the diverse cast represented Adichie’s characters with controlled authenticity, but the story ended abruptly and missed much of the horror of civil war and the depth of the book. But for whatever reason, the film was not released on a nationwide level. It had limited showings on the east and west coasts, and is currently available on DVD online and now on Netflix.. One cannot help but wonder if it was Hollywood’s profit motive, the American public’s lack of interest, or the negative light it shed on the Nigerian government and people that hindered the promotion of this movie.

Other works by Chimimanda Ngozi Adichie include her first novel, Purple Hibiscus (2003), a short story collection, The Thing Around Your Neck (2009), and her third novel, Americanah (2013), all “jewels in the crown of diasporan literature.” Her stories focus on life in Nigeria and the ensuing conflict with western culture. Most recently, she published a short prose piece on what it means to be a woman in the 21st century, We Should All Be Feminists. She shares her time between Nigeria and the United States writing and lecturing. Check her out! You’ll be glad you did!